Choosing between The Levoit Vital 100 vs Core 300 air purifiers can be challenging because these two models come with very similar features and specifications.

In this post, we will be reviewing these two models so that you can understand the differences between them.

Levoit Vital 100 vs Core 300 Quick Side By Side Comparison

Differences Between Levoit Core 300 vs Vital 100

The Levoit Core 300 comes in a cylindrical shape with a curved air intake area.

It is white and black in color, so it easily fits in most rooms and office settings.

The Levoit core 300 is compact and lightweight so that you can easily move it around your room or office.

One of the neat features of this device is that it comes with a touch screen where you can control all its functions and settings, including turning on/off, setting timers, adjusting fan speed without having to use the remote controller.

On the other hand, Levoit Vital 100 has a unique rectangular design and is available in white and grey colors.

It is quite heavier and larger than the Levoit Core 300, but it is still lightweight and compact enough to be moved around your room.

The Air Change Rate (ACH) of the Vital 100 is 4x, which means it can change air up to four times in just an hour.

On the other hand, the Core 300’s Air Change Rate is 5x, which means it can change the air up to five times in an hour.

So if you have a larger room, you may want to go for the Vital 100.

But if you have a smaller room, the Core 300 would be more ideal.

However, the Core 300 makes up for this weakness with its higher ACH and CADR rating.

Here, we want to look at the filtration system as that’s what decides how well an air purifier operates.

The Vital 100 comes with a standard three-stage filtration system. There are three filters: A “classic” prefilter, a HEPA filter, and a carbon filter.

The main filter is the high-quality HEPA filter that removes particles as mall as 0.3 microns in size with up to 99.99% efficiency.

The carbon filter is intended to remove odors and other chemical particles.

The Core 300 also comes with a three-stage filtration system. Just like the Vital 100, it also has a pre-filter, HEPA filter, and carbon filter.

Its main filter is also a HEPA filter, which is able to remove even smaller particles with up to 99.97% efficiency.

The only difference between these two filtration systems is that with the Core 300, you have four options when it comes to replacement filters.

You can choose between a standard filter, a Toxin Absorber filter, a Mold and Bacteria filter, or a Pet and Allergy filter.

This makes the Core 300 more customizable than the Vital 100.

Both air purifiers are pretty easy to set up. You don’t need any tools to assemble them.

All you have to do is follow the instructions on how it should be done, and this will take less than five minutes for both models.

Both purifiers are easy to use as well.

They both have a very easy-to-use touch control panel where you can set up all your settings.

The Vital 100 has a standard control panel with a power button and adjustable settings such as a fan speed control, display on and off, and a timer settings button.

There is also a filter indicator light that tells you when it’s time to change the filter.

The Core 300 comes with a similar control panel.

However, it has two additions; the Child Lock feature, which allows you to lock all the buttons so that your children won’t be able to change any settings, and Sleep Mode, which reduces the fan speed and blue light.

It also has a filter replacement indicator that lets you know when it’s time to change the filters.

Both devices are pretty easy to clean.

The front grille of both devices can be removed easily, which allows you to wipe it down and keep the air purifier looking new for a long time.

These two air filters have a few things in common:

As mentioned earlier, both devices have a three-stage filtration system.

Both also have the same type of prefilter, HEPA filter, and carbon filter.

Their main filter is a HEPA filter, which is able to remove as small as 0.3 microns particles with up to 99.97% efficiency.

Both devices are made from durable plastic. The grille is made from steel which makes it durable and long-lasting.

Both devices are pretty quiet when in use.

Unfortunately, both devices do not have an automatic mode. This is perhaps their main drawback.

These air purifiers have a three-speed fan setting. This might not be enough for some people, but it should do the job just fine.

Both devices are very nice to look at with their sleek design that fits in any modern room.

Product Overview Of The Levoit Vital 100 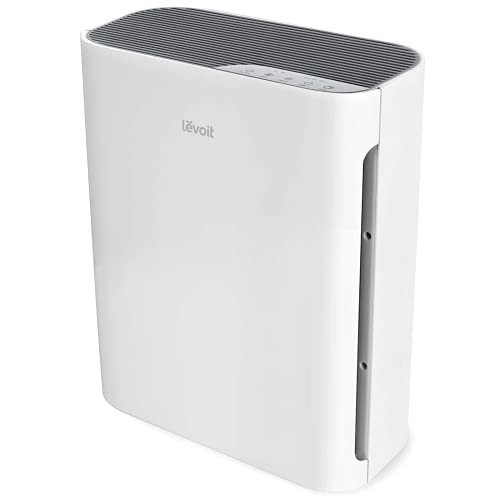 The Levoit Vital 100 is a great air cleaner that provides you with excellent filtration, compact design, and ease of use.

It is suitable for medium-sized rooms up to 300 square feet.

The filtration system is very effective and removes up to 99.97% of all particles in the air, including the smallest ones that can cause allergy and asthma symptoms.

The Vital 100 is small, lightweight, and compact, which makes it easy to move it from room to room in your house.

It will only cost you about $30 annually to operate the Vital 100. The filter has to be replaced every 6-8 months of usage.

However, you should know that the Levoit Vital 100 is not a smart air purifier.

It doesn’t have an intelligent sensor to detect the air quality in your room.

Product Overview Of The Levoit Core 300 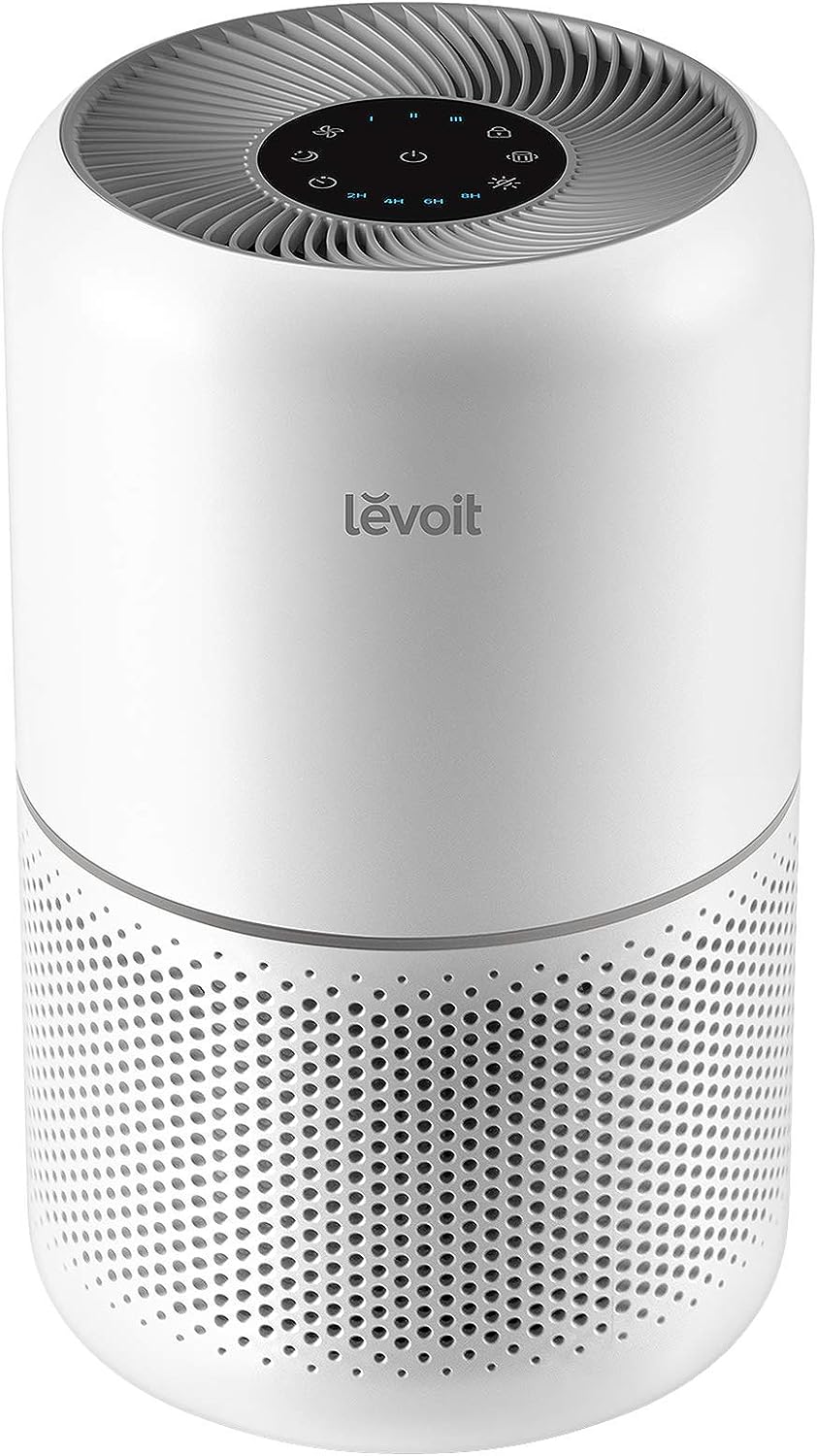 The Levoit Core 300 compares very favorably with the Levoit Vital 100.

It is a true HEPA air purifier that can filter up to 215 square feet of space.

It has a three-stage filtration system that is very effective and removes up to 99.97% of all particles in the air, including the smallest ones that can cause allergy and asthma symptoms.

The Core 300 has a child-lock feature that prevents children from operating it without your permission.

It also has a sleep mode which will allow you to set it on low power at night so that your bedroom remains fresh and clean while you sleep.

The filter has to be replaced every six-eight months, and it will cost you about $30 annually.

As already discussed, these two devices have a lot in common.

For example, they both have a three-stage filtration system that is very effective at removing all types of particles in the air.

They also share many other features such as noise level control with three different settings, three-speed fan control.

The only real difference between the Levoit Vital 100 and Core 300 is their coverage area.

There is also a difference in CADR. The Levoit Vital 100 has an average CADR of 130cfm for smoke, 130cfm for pollen, and 130cfm for dust.

This means that the Levoit Core 300 is quicker at removing particles in the air.

It will also take less time for it to completely clean and purify a room of your house.

Other comparable features include the sleep mode and the child-lock feature. The Core 300 has these features, while the Vital does not.

No. the Levoit Vital 100 doesn’t use UV-C light and therefore doesn’t produce any Ozone.

You do not have to worry about any harmful effects of Ozone.

How long does the Levoit 300 filter last?

While how long an air purifier filter lasts depends on the frequency of usage, Levoit recommends changing the filter after 6-8 months of use.

You can buy the filter from the manufacturer’s online store or on Amazon.

The Levoit 100 filter needs to be replaced every six-eight months. The company recommends that you buy the filter from their online store or on Amazon.

No. This device does not use UV-C light. It is 100% safe to use in the home and does not produce any Ozone at all.

Does Levoit vital 100 have an auto mode?

No, it does not. The Levoit Vital 100 is a manual purifier which means that you need to set your own timer for when you want it on and off.

Does Levoit vital 100 have a timer?

Yes, the device has been equipped with a 24-hour timer which allows you to set it for up to 24 hours of continuous operation.

The Levoit Vital 100 and the Levoit Core 300 are among the best air purifiers in the market right now.

They are very effective at removing particles and harmful gases from the air while also being compact enough to fit into tight spaces or small rooms.

If you are caught between choosing the Levoit Vital 100 and Core 300 and can’t decide which one to choose, this article has hopefully helped you make up your mind.

Both are great devices effective at cleaning the air and making it breathable.

If you’re looking for more air purifier resources, consider checking out our other post on air purifiers.

Irene Mills is eager to help others create an indoor allergen-free home. She has years of experience testing out air purifiers, dehumidifiers, and other products designed to help with indoor air quality. Want to know more? Check out our About Us page. If you have a Dyson air purifier, then you know… Do you have a Blueair purifier that isn’t working right? Are… Shark Air Purifier 6 Vs 4 (Differences & What Is Better?)

Shark is a brand that is known for making high-quality…